This has come to my attention as a problem quite a few people face, yet you might not know how common it is because it can be embarrassing, so people aren’t necessarily going to talk openly about it! If you’ve found yourself wondering Why do I get pimples on my butt? but have been too embarrassed to ask anyone for help, then this post is for you.

What Causes Pimples on the Bum

If you do any amount of research on this topic online, you’ll run into two different schools of thought:

Okay, so this is confusing! I hear you. Let’s look at both of these statements and try and figure out what is going on.

If you aren’t already familiar with how pimple that you would get on your face form, they are the result of blocked skin pores trapping bacteria inside a pore, which causes inflammation and infection as the bacteria multiply. This school of thought says that pimples that you get anywhere on your body are the same as pimples that you might get on your face – the way these types of pimples formed is explained below.

How do Pores Become Blocked? 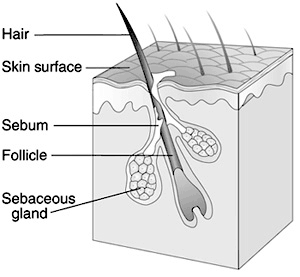 Your skin is constantly shedding the dead outer layer of skin cells. The skin also produces a waxy, oily substance called sebum to keep your skin naturally moisturized. Sebum is produced inside the pores in sebaceous glands. Sometimes dead skin cells can become stuck in the sebum and clump together, blocking the opening of the pore – this can lead to a build up of sebum inside the pore as it continues to be produced by the sebaceous glands.

A blocked pore full of sebum is an environment where bacteria can grow and multiply, which will cause the skin to become inflamed and produce pus inside the blocked pore as your body tries to fight the bacterial infection.

This school of thought says that pimples on the butt are actually a different skin condition to the type of pimples that you get on your face, even though they may produce similar-looking ‘pimples’.

One of the most common conditions that can occur on the bum that is commonly mistaken for acne is called folliculitis, where the hair follicles become inflamed and infected by bacteria, which causes pimple-looking spots on the skin.

The difference between ‘traditional’ pimples that you get on your face and folliculitis, is that one involves the sebaceous glands and the other doesn’t.

This is important to note, because it means that most acne treatment creams that work by reducing the production of sebum by the sebaceous glands will not be effective on treating the symptoms of folliculitis.

But why would I get pimples on my butt and nowhere else on my body?

If you’re getting pimples on just your butt specifically, then it may be caused a number of reasons – you should look at how you treat that area of your body if the pimples are local in that spot. Some factors to consider may be:

Other Skin Problems that Can be Mistaken For Pimples

Now that you know what the causes of butt pimples can be, click here to read the next post in this series which goes into more detail on how to get rid of them!

One product we do recommend (that is specifically formulated for clearing pimples from the buttock area) is this “Butt Acne Clearing Lotion” which even comes with a money-back guarantee.

You can check out more details and the user reviews on Amazon by clicking the image below for more details: 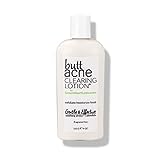 (1898)
$34.99 ($8.75 / Fl Oz)
REVOLUTIONARY PRODUCT: First ever acne lotion formulated specifically for the buttocks. SOFTENS & CLEARS: Starts softening your skin and clearing-up butt, thigh, and back breakouts in just 24 hours. GUARANTEED RESULTS: See drastic improvements day-af... read more
(as of January 28, 2022 - More infoProduct prices and availability are accurate as of the date/time indicated and are subject to change. Any price and availability information displayed on [relevant Amazon Site(s), as applicable] at the time of purchase will apply to the purchase of this product.)
Why Do I Get Pimples on my Butt? Embarrassing Problems, Straightforward Answers!
Tagged on: pimples

2 thoughts on “Why Do I Get Pimples on my Butt? Embarrassing Problems, Straightforward Answers!”