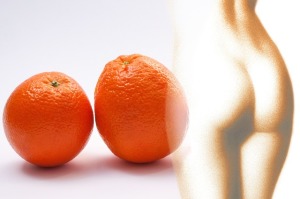 Hail damage. Orange peel skin. Cellulite. Just hearing the word itself is enough to make many women cringe as they picture their own dimple-affected areas. But what is cellulite exactly?

The Basics of Cellulite

Cellulite is a name given to describe areas of the body where the skin takes on a dimpled appearance due to uneveness in the distribution of fatty tissue beneath the skin.

Cellulite is purely a cosmetic issue, meaning that it has no adverse impact on your health, but it can look unsightly.
Basically, it only affects the visual appearance of your skin, and nothing else.

In general, it is perceived as ugly, and is generally an unwanted affliction. (Put another way, I’ve never met anyone who wanted cellulite, though there are some people who have cellulite and aren’t bothered by it.)

The condition is strongly associated with fat. Because of this association, it is often assumed that cellulite only affects overweight or obese individuals, but this is popular misconception. Individuals of a healthy weight range, as well as skinny or underweight people are just as commonly affected by cellulite.

The term ‘cellulite’ is said to have been created by the beauty industry in the 1920s, as a jazz word to promote services and treatments which no doubt would have been marketed to treat the issue (much like today).

Due to this uneven texture of cellulite, the condition has also picked up nicknames such as ‘hail damage’ and ‘orange peel skin’, purely because of the similarity in appearance to these descriptions.

The appearance of cellulite can vary from person to person, and it can range from mild (being barely noticable) to severe.

Mild cellulite will appear only when the skin tissue is compressed, but is otherwise unseen or otherwise barely noticable under normal conditions without this stimulus.

Medium cases of cellulite may appear when standing due to the forces of gravity, and in some milder cases can all but disappear when the affected person is lying down.

Severe cellulite will be very noticeable at all times, even when lying down. Here’s what a very severe case can look like:

Where Does Cellulite Occur?

Cellulite can occur anywhere on the body where there is a layer of fat beneath the skin, but the most commonly affected areas are:

Areas which are less commonly affected are:

In men, cellulite will usually be seen in the abdomen and waist regions.

Who is Affected By Cellulite?

Cellulite is surprisingly common, though it may not appear that way if mainstream media is anything to go by.

Though you rarely see cellulite on people pictured in magazines or advertisements, it may surprise you to learn that up to 98% of women are estimated to suffer from cellulite, and up to 10% of men.

Clearly, women are the main victims of this condition. Cellulite usually rears its ugly head after puberty when bodyfat percentage increases by around 5-10% on average in women.

Men generally have a lower body percentage of fat than women (around 18% for men compared to 25% for women, in adults that have a healthy weight range), and this is just one reason why males are generally less affected by cellulite than females.

The Causes of Cellulite

So, what exactly causes cellulite? Why are some people affected by cellulite worse than others?

Cellulite is caused by fat bulging out from underneath the skin. If you imagine that the skin structure is like a woven mesh, fat expanding from within the mesh can bulge through the gaps. This creates the uneven appearance of cellulite.

Does it have any correlation to how fat or overweight you are?

Sometimes, but usually more determining factors of cellulite can be genetics, your particular hormonal profile, and predisposition factors. There is a great deal of variation in the human species, and as a result many people will have many different experiences when it comes to cellulite – including the causes of the condition.

Can I Do Anything About My Cellulite?

If you have cellulite that you don’t like the look of, the good news is that you can do something about it to reduce its appearance.

If you’re eager to learn more, click through to read my best recommendations for how to get rid of cellulite.

What is Cellulite? Understanding The Enemy
Tagged on: cellulite

7 thoughts on “What is Cellulite? Understanding The Enemy”